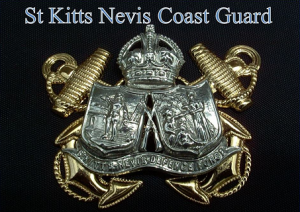 The Federation of St Kitts and Nevis gained Independence in 1983; The British monarch represented by a Governor-General is the head of state. Located at the northern end of the Leeward Islands in the Lesser Antilles chain, the Country comprises of St Kitts (formally known as St Christopher) (68 Square miles) and, 2 NM to the southeast, Nevis (36 square miles). The constitution allows for the secession of Nevis from the federation. The capital of St Kitts and the federation is Basseterre; Charlestown is the capital and largest town on Nevis. Territorial seas (12NM) are claimed. A 200NM Exclusive Economic Zone (EEZ) has been claimed but the limits are not defined. The Coast Guard was part of the Police Force until 1997 when it transferred to the Regular Corps of the Defence Force.

The mission of the St Kitts Nevis Coast Guard: The St Kitts Nevis Coast Guard is dedicated to the protection of life and property at sea and to protecting the marine resources which falls within the jurisdiction of the federation. The unit is committed to enforcing all laws and treaties pertinent to the federation and the preservation of its territorial integrity and the democratic way of life enjoyed by our citizens. This we will accomplish with pride, professionalism and economy of resources.